OF THE INTERNET ARCHIVE?

If not, let's tell you a bit about it.
Founded 21 years ago by Digital Librarian, Brewster Hahle, to give everyone
everywhere access to all knowledge for ever - for FREE.

People told him: why collect webpages?

But he started his Wayback Machine and the Internet Archive followed at a fast
pace and took hold. For instance, in 2017 it saved 200 terabytes of government data
that might have disappeared;
Fixed more than 3 million broken links in Wikipedia using the Wayback Machine;
Archived 757 million tweets and that's just in one year, there are loads more before!

Look for and find the INTERNET ARCHIVE. You could help it continue because
it's so educational and so useful.

CLICK ON THE ABOVE LOGOS FOR LESBIAN AND GAY SOLIDARITY, INTERSECTION AND SPAIDS

WE TRY TO MAKE SURE OUR LINKS ARE WORKING AND UP TO DATE AT ALL TIMES. IF YOU FIND ANY LINKS WHICH ARE NOT WORKING, PLEASE CONTACT US AND WE WILL ENDEAVOUR TO FIX THEM AS SOON AS POSSIBLE.

COMPLETE PAGE CONTENTS - find the page you want at a click!

DeeCee who lives with Mannie and Ken, and Sam who lives next door with Steve and Maria, getting together to celebrate Ken and Mannie's birthdays in October 2006 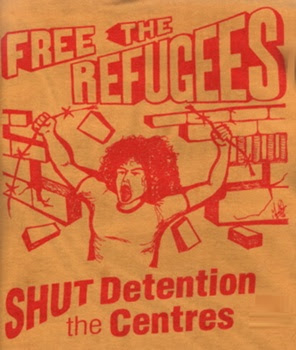 
Australia is trying to negotiate an off-shore solution to Asylum Seekers coming to Australia in boats which are not seaworthy, and which have already been responsible for many drownings offshore. The latest attempt is the so-called Malaysian solution involving Australia sending 800 asylum seekers to Malaysia in exchange for 2000 refugees in Malaysia. Both the Australian Government and its parliamentary Opposition are demonising people fleeing desperate situations in their countries of origin, mainly because of Australian military intervention in those countries.

The total numbers of asylum seekers trying to enter Australia is a miniscule number in terms of refugees and asylum seekers around the world, and most of the people in Australia illegally have arrived by plane!

Australia is signatory to United Nations conventions on refugees but is ignoring these UN documents in its political attempts to stop the demonised "boat people" ever setting foot in Australia.

Help to obtain justice for Asylum Seekers in desperate situations.

The situation has worsened with the federal government reopening the concentration camps on Nauru and Manus Island.

Get the government to close these camps now.

(Our beloved companion DeeCee died on 28 May 2011 aged 8 years. We miss him very much - he was part of the Preston Three!

South Africa and the AIDS Criminals

Your hosts, Kendall and Mannie

CONTACT US AT: josken_at_josken_net - email address for all items

Links to web sites of interest

Write to us with your views on any topics

Mannie De Saxe also has a personal web site, which may be found by clicking on the link: RED JOS HUMAN RIGHTS ACTIVISM

Mannie's blogs may be accessed by clicking on to the following links: